How to build a great agile team when everybody is an expert?

Yet another week of mentoring is over, the next team is ready and another one prepared. This time it was, as always, quite unique and interesting. As I always say.

We met a new team of people, working in a successful company and even though they’ve been sat in the same room for more than 7 years, they never really worked together as a team. On this basis, it could be expected that it will not be difficult and go smoothly. But the experienced seniors would know that exactly the team like that, ‘the almost team’, is the worst situation.

Kaine ahnung? I think that the team is more than just a group. A team is a group with the common goal, it’s not just a group of people sitting together in one room.

Misters ‘masters’ came to the training in a great mood. Pretty good for the first meeting. And then the typical question was asked by an agile mentor: ‘Who are you, my friends? The answer felt like a scythe on the stone. ‘D.rest. The rest.’ Caught with sheepish smiles.

They have no idea why they’d been put together. Every one of them does something different. They don’t know anything about the work of the other. And, basically, they are scared that they won’t be even interested. And just like that, the 20 eyes started staring at me, sending the message ‘So, what are we going to do about that?’

During the training, one of them said ‘We’re like from the movie Ocean’s 11. Every one exceptional at something.’ By the way, this is my second team Ocean’s 11. (the first team, this is not about you ;). Or is it?).

Since that moment you hadn’t heard anything else other than O11, O11, O11. George, Brad, Matt, Elliot, Bernie, Carl,… 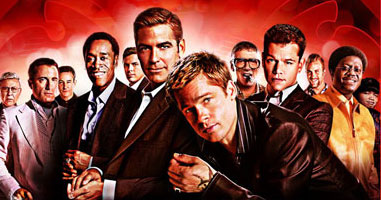 This was the metaphor that has broken the ice between them. Thanks to that they’d realized that it was necessary to try to use different abilities and they are, in fact, their great advantage.

They have agreed that they do not want to do this because they have already experienced this over the past few years. Team members want to go on a vacation. They need to go to the doctor from time to time, need to be with family, and sometimes do not want to be doing something for the hundredth time, want to experience something new.

So we’ve mapped the technologies, experiences, who knows what and who wants what. Who is on the given topic:

The classic matrix of abilities. Plus a lot of desire, sincerity, openness and courage. Based on this we then found multiple members of each topic. Thus we introduced the foundations of micro-teams with substitutability.

And so, the team where the beginning looked like an end, we ended up at the beginning. Thanks to listening, effort to understand and especially the effort to play together to achieve the same goal.

Guys, thank you very much for your energy…