Agile and Scrum have become widely used in IT and even though the advantages of this framework are numerous, some people just don’t like it. A lot of them had their own experience with Scrum, in particular with bad Scrum. Attending 45 minutes long “daily stand-ups”, Scrum Master demanding overtime because other team’s velocity is higher or even a Scrum Master acting as a project manager would probably make everyone feel like they need to leave the room if someone even mentions the word “Scrum” or “Agile”. But how can the situation get this bad? Who can make Scrum an enemy of the team? Ironically, besides others, the Scrum Master.

My Scrum team, MY rules

Scrum Master is the team leader in Scrum. It’s someone who knows processes and why the team needs them. He (/she) is a facilitator, a mentor to the team, acquires new information about Scrum and changes the culture of the company. To achieve a successful Agile transformation of a company choosing a good Scrum Master is crucial.

However, no one is perfect and even someone with the best intentions in mind will fail. It’s fairly common that a new Scrum Master misunderstands the most important parts of his new job, which can negatively affect the team and the whole development. Naturally, an experienced Scrum Master can face similar issues. It’s very easy to fall into a routine, especially if you’re not getting proper feedback from the team. Some Scrum Masters might not be willing to admit they’re the ones making a mistake, but they’re human too and it’s important to remember that in Agile, failure isn’t considered a negative.

“Just because I’m a certified Scrum Master, doesn’t mean I’m the best in the world and always right.”

Google is full of “lists of typical mistakes Scrum Master make”, but in this article, we’ll analyze a wrong approach of a Scrum Master and give you a few tips on how to do it better.

A new Scrum Master eager to do everything right by following the Scrum guide to the letter can eventually start caring more about the process and methodology than people in the team. If there’s a problem, a Scrum Master does everything to make sure the team follows his set of rules and keeps pushing the team, lecturing them to do what he says. People get frustrated, lose respect for him/her which most likely results in (more) late deliveries. The Scrum Master tries to gain authority and pushes more, the team resists more and more projects are late and so on… This type of response from the Scrum Master can create an infinite loop of frustration and besides others, late projects.

If you do this, you’re not a facilitator. You’re telling the team HOW to do their job, not leading them to fulfil the vision. A wrong approach can lead to smaller or bigger problems and eventually result in a bad relationship with Scrum and thus refusing any new methods. Since something like this is a very complex problem affecting a variety of factors, signs can vary. You can experience anything from constant complaining (or whining) to late releases, unfinished sprints or frequent change requirements.

A good Scrum Master should know how to work with people, be empathetic and combine it with the methodology of a process. This way, a Scrum Master should be able to adjust the Scrum framework to fit the needs of the team or help the team determine what is best for them. Teaching the team to be self-organized should be the goal of a good Scrum Master. He should have good problem-solving skills and conflict resolution skills in case there’s a misunderstanding in the team or between the team and the outside world, for example, a customer. This comes with the need to know when to push a little, be authoritative or when to let go and try to motivate.

The described approach will gain the respect of the team and as a consequence, the team will be more open to new Scrum practices and culture.

Great Scrum Master will focus on finding the real root cause of a problem, not just the symptom. 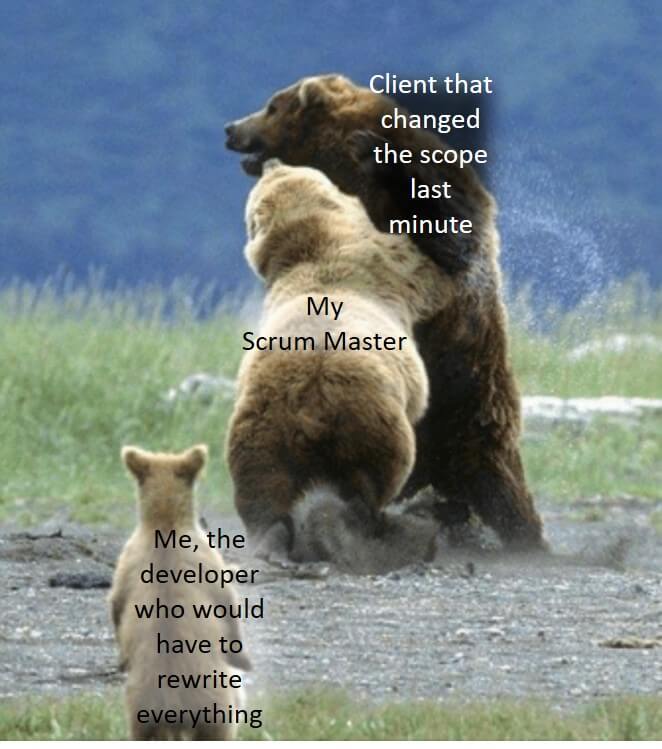 Scrum Master in his natural habitat protecting the team

Let other leaders inspire you

Scrum Master is, above all things, a leader. But how can you become a strong leader? This question is not easy to answer. Some of the qualities you should definitely focus on are caring about others, empathy and good, open communication. Look at what great leaders had to say or how they set an example themselves.

„As we look ahead into the next century, leaders will be those who empower others. “Bill Gates, former CEO of Microsoft

„Real leadership is when everyone else feels in charge. “Bono, front man U2

„To be truly successful, companies need to have a corporate mission that is bigger than making a profit. “Marc Benioff, founder of salesforce.com

Benioff also created “The Salesforce 1-1-1 Model”, in which the company gives 1% of profit, 1% of equity and 1% of the time to nonprofit organizations and helps people in need (more here). The 1-1-1 model invites other companies and their entrepreneurs to commit important resources (product, time) to support integrating philanthropy into their business from an early stage.

Nelson Mandela learned a lot from his father, the tribe chief when he attended tribe meetings with him as a young boy. He describes the two strongest memories: everyone would always sit in a circle, and his father would always speak last. According to Mandela, the leader’s job isn’t to tell people what to do or what to think but to form a consensus of people’s ideas. Only after hearing everyone’s opinion, Mandela would summarize their points and offer his own.

Charles Coffin was a co-founder and first president of GE (General Electric) corporation. He built up a struggling Thomson-Houston Electric Company to be equal to Thomas Edison’s companies. Eventually, these two merged to form GE. How did Coffin manage to build a company that would compete with Edison? He was a great leader. Unlike Edison who employed thousands of people, Coffin created space for scientists and managers to think for themselves and work on their own vision. He didn’t give directions, instead, he saw the significance of individual thinking and self-sufficiency. He was always open to suggestions and ideas from people around him and only after listening to everyone, he made a definitive decision.

„A man born to command, yet who never issued orders. “is how Charles Coffin is described on the official GE website.

If you want to read more about inspiring leaders and their life, try Leaders eat last by Simon Sinek (or watch one of his talks on YouTube) or Tribe of Mentors by Timothy Ferris.

Scrum Master builds and leads high-performing, self-organizing teams and instils in them a clear vision and passionate drive. He drives the implementation using the pull system, doesn’t micromanage or assign tasks.

In conclusion, if you’re a Scrum Master, free yourself from your ego, be realistic and if there’s a problem, try to find the best solution you can. Do the best you can until you know better.

P.S. for the team: How to help your Scrum Master

Don’t forget that feedback is fundamental in Agile. If you want to feel good at work, you have to be the one who tries and do your part.

Is something bothering you about your Scrum Master? Let him know, that’s the point of doing a retrospective. He is a part of the team just like everyone else. Your feedback is a crucial part of the job and allows the Scrum Master to evolve and mature in his role. The team shouldn’t be scared or worry about giving feedback. Be determined and speak for yourself. Real change occurs from the bottom up.